Western medicine has pushed back the frontiers of disease, making death rarer, at least in the sense that it does not intrude into our lives with the brutality with which it visited the Victorians. In the 19th century death often came for the young and those in the prime of life. There can have been few families who saw all their children grow into old age. Our ancestors, who might face dying at any age, had better resources for dealing with its reality than we do, including rituals for every stage of dying, burying and grieving. Some cultures still have them. But months of formal mourning now seem excessive, even absurd, in the healthy, prosperous West, where death is not to be spoken of except hurriedly, in hushed tones. In England, it’s almost embarrassing. We’re anxious to do the right thing, not to be ‘a bother’. No wonder we coined the phrase ‘dying of embarrassment’.

Indeed, I’m faintly embarrassed to have raised the subject now. Let’s not go there.

But we must. Death is the only thing of which we can be certain, however much we proclaim ‘The Physical Impossibility of Death in the Mind of Someone Living’. We might not know it, yet, but we know of it. So we keep it on the other side of the glass. Science and medicine form an impenetrable, if transparent, barrier between the living and the dying.

In the past, death announced its coming. Unless it came catastrophically in an accident or a heart attack, it allowed some measure of preparation. People died at home, in their beds. A family gathered, knowing what was happening. The living sat with the dying and tried to ease their suffering. The priest or the minister was called. Thomas Lynch, the American poet who is also an undertaker, has written movingly about the time – most of time, it must be said – when people were born and died where they lived and among those with whom they had lived. That is a rare experience nowadays. My father died at home, a small mercy in a sudden and frightening end. But almost every other lost friend  has died in a clinic’s impersonal room, not because they all needed 24 hour medical care but because it’s how we manage dying now in rich societies. As Lynch says:

The difference, for many, is the loss of religious faith that once gave death transcendent meaning. A death seen as passing into another life evidently has nothing in common with a death seen as the end of all life. Whatever comfort religion brings the believer is unavailable to those who outside the faith. And for them, the rituals of death developed in a context of faith can feel hollow, or worse. So they are left only with the antiseptic services – no one could describe them as rituals – of medicine and its unspoken embarrassment at failing to prolong life.

Into this space, tentatively, delicately even, artists have begun to step. In Leiria (Portugal) is the Sociedade Artística Musical dos Pousos (SAMP), a music school run by and for the local community since 1873. Its present director is Paulo Lameiro, a musician and educator of exceptional imagination. Alongside the usual programme of instrumental teaching and concerts, the orchestra, choir and swing band, he has reached out to local institutions, including the prison and the hospital. Among other work, SAMP musicians have explored how to share music with babies and the very ill. Bringing music to the dying and the bereaved grew out of that experience.

When an elderly man died during a performance in a hospital common room, everyone present wanted to sustain the music and the atmosphere it had created. The clinical staff were asked to wait. There was a person to honour; a life event to respect. The music turned out to be a valued support for that reality.

Since then, SAMP musicians have been asked to play for people at the end of life, when families have gathered for the heartbreaking moment of shutting down an incubator,  and in the moments after death. The musicians have provided comfort to the dying and to the bereaved. It goes without saying that they are present at these times only at the request of the dying and the family. And just two of SAMP’s members offer this support. They have learned how to respond imaginatively to each individual, aware of that person’s relationship with music. They have learned too how to cope sensitively with the feelings in the room, not least their own.  Music, familiar and loved or newly improvised, has helped mark the moment’s unique importance and support those who are living it. Like life itself, its presence is actual and meaningful. Intangible, it touches everything.

One moment it is there, heard but unseen, and then it is gone. So light and yet so great.

In January 2010, the Canadian folk singer Kate McGarrigle was able to die surrounded by her musical family, including her son Rufus Wainwright, who spoke of the moment later:

“We sang to her as she lay there… as we were having this jamboree, her breathing became more laboured and she made a moaning noise. One of the nurses said this could go on for four days and we had already exhausted the back catalogue. Then Kate breathed a little differently, it was like she was saying, ‘Hold on, I’m going to end this show’, and she died. I was looking right into her face, her eyes were open, and my aunt Jane was holding her hand. It was an amazing experience…”

For millennia, people have thought and written about how to die. Montaigne, who lived in the 16th century and saw a lot of death, called dying ‘without doubt the most noteworthy action in a man’s life’. Today, the best on offer may be dying with discretion. But there are alternatives, as SAMP has shown. It is hard to imagine a more vulnerable and profound artistic work than these performances for the dying and bereaved.

Each person, each family will have their own wishes: the SAMP approach is not for everyone. But it is a reminder of art’s place in helping us find new ways of marking the fundamental moments of life, including its end. Last week SAMP hosted a conference on art and health in the hospital of Leiria. Its title was ‘Aqui Contigo: Porque d’Arte somos’  – in English, 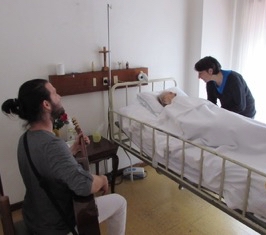 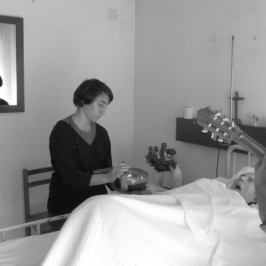 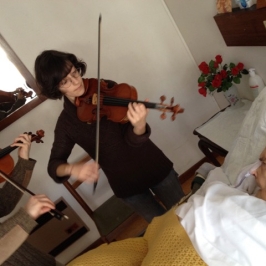 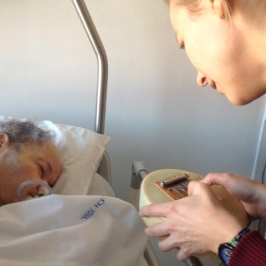 This post was written at the request of London Arts and Health Forum and published in slightly different form on their blog on 19 April 2017.