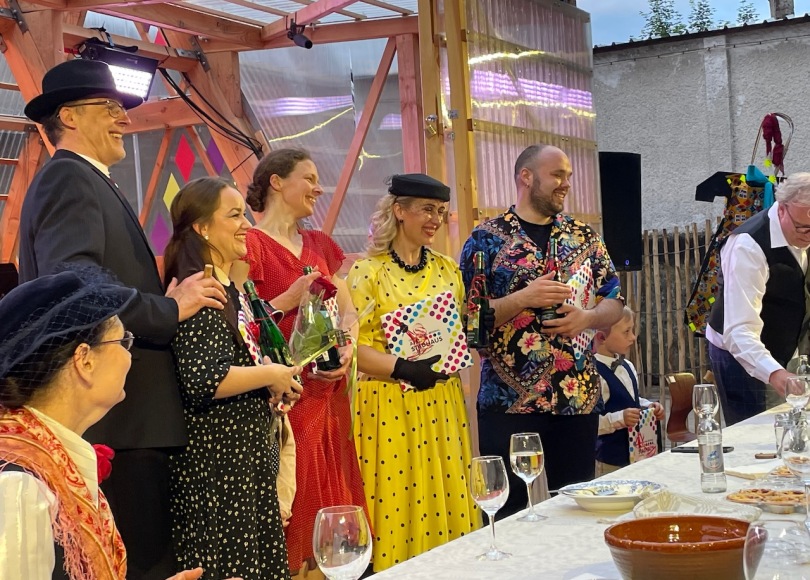 Between the Traction opera performances in the prison last week, and those that will take place in Lisbon at the end of this week, I was able to spend some time with friends from distant parts of the world who happened to be closer than usual. Yesterday, I had lunch with Àlvaro Restrepo and Marie-France Delieuvin, whose brilliant dance work in Cartagena de Indias (Colombia) I have written about before. We last saw each other ten years ago and it was a joyful reunion during which we began sketching plans to work together again next year. I am starting to understand what I can do with my remaining time and energy, and this is certainly part of it.

Before then, on Friday evening, I spent time with Ed Carroll, Vita Gelūnienė, and other friends from the Šančiai community association in in Kaunas, Lithuania. In 2018, I worked with them on a community arts summer school to create a community opera. Four years later, against a background of pandemic and war, they had come to Luxembourg for the first performance of ‘The Cabbage Field Opera’ and it was magical to see this perfect butterfly emerge from its chrysalis.

Kaunas is a European Capital of Culture this year but hasn’t chosen to include this opera in its programme, perhaps because it was created independently and without funding or institutional support. Or it might be that the opera is part of a long campaign by the Šančiai community to resist the municipality’s plans for insensitive and unwanted urban development in this historic neighbourhood.

Instead, it was Esch-sur-Alzette and Ville de Differdange, also Capital of Culture in 2022, who invited the Šančiai group to perform, and offered them funds to do it. So last week, they travelled to Luxembourg, where they had three days of intensive rehearsals before the first performance on Thursday. The cast included eight Lithuanians living in the Duchy, who had been rehearsing online with the rest of the group. The string quartet also met the singers for the first time. One member is the brother of the late Vidmantas Bartulis, the opera’s composer who lived in Šančiai. Those close to Vidmantas must have had mixed feelings as they heard his music performed at last.

The performance took place outdoors, on a temporary stage under lime trees in Differdange. Passers-by stopped to watch from the street, captivated by the gorgeous singing. Some came to join the crowd in the courtyard. At the end of the 50 minute performance, the audience was invited to join the cast for a bowl of cabbage soup, with dark fennel bread and local wine. The Cabbage Field is a piece of open land that local people have been defending for years, and it has become an icon of the community’s vision for its future, so the soup was both nourishing and symbolic. The celebration continued as the light faded, in happy communion. Late in the evening, some of the cast sang Lithuania’s national anthem, full of love and longing for a peaceful land of waving wheat fields.

The opera would be a great achievement for a well-resourced professional company working with a community group. Its creation, almost without assistance, by people who had never made an opera before is simply extraordinary. The narrative emerged from Šančiai’s history as the site of Russian barracks and its experience of war and military occupation, focussing particularly on the victimisation of women in conflict. Those realities have become even more urgent since the Russian invasion of Ukraine, an event that has provoked fear and resistance in other countries bordering on Russia, especially in those, like Lithuania, that were once conscripted into the Soviet Union.  I hope it will be performed again, in Kaunas, and with new music for the small parts left unfinished at Vidmantas Bartulis’ death. It would be the best tribute to the spirit of this community.

PS When I got home on Saturday, I had a message to say that Žemųjų Šančių bendruomenė had won a prize in the EU’s New European Bauhaus programme for their project to map the neighbourhood’s cultural and natural resources. They were runners up in the category ‘Regaining a sense of belonging’, behind an actual housing project in Vienna. ‘From little things big things grow.’

My Tweets
Join 4,875 other followers