‘I think people with learning difficulties have had quite a bad deal in life and I think this is finally turning the page, and making a big change in that, so I think it’s very important that people in these professions learn from us to know what we’re about and then they go into those professions and they have a much better working life because of it.’

The social outcomes of participatory art can be important for the people involved, but they can be just as profound for the people who experience the art they make. That is particularly true where the work happens within a context of cultural democracy, which works towards a society in which everyone can use art to communicate what matters to them.  The Lawnmowers are an independent theatre company based in Gateshead, in the north east of England. Run by and for people with learning difficulties, the company has grown since its foundation in 1986 through a series of self-devised theatre productions about things that matter to its members – everything from health care or benefits to hip hop, sex and Elvis.  They have also developed a youth theatre project, regular club nights and other activities,

I first visited the Lawnmowers in 1996, for the research that became Use or Ornament?, and this is part of what I wrote about them then:

In 1995, the Lawnmowers produced a video to fill a gap in existing sex education re- sources. The Big Sex Show is a 30 minute video which tackles relationships, feelings and safe sex in a straightforward and accessible manner. It tells the story of two learning disabled people who fall in love, and the personal and social hurdles they have to cross as a result. It includes plenty of information about sex, contraception, HIV/AIDS, but also offers insights into coping with feelings, and the expectations of others. It involved much detailed research, and close co-operation with health workers. The Lawnmowers have performed The Big Sex Show all over Britain, from Brighton to the Edinburgh Festival, and have toured in Poland. The video, accompanied by booklets aimed at non-readers, has been sold and hired to many groups of people with learning disabilities and others. The company’s new show, The Right Wrong, explores the issue of disabled people’s political rights, as one member explains: ‘This play is about asking Parliament to change things and how different people look at people with disabilities. I play the part of someone who wants to be an MP. I would in my real life like to be an MP. The shows prove to people that we can work like anyone else in the theatre.’ (Matarasso 1997: 45-46)

We’ve stayed in touch since then, and at the end of last year the Lawnmowers invited me to join them in a new project about living well as an older person with learning difficulties. 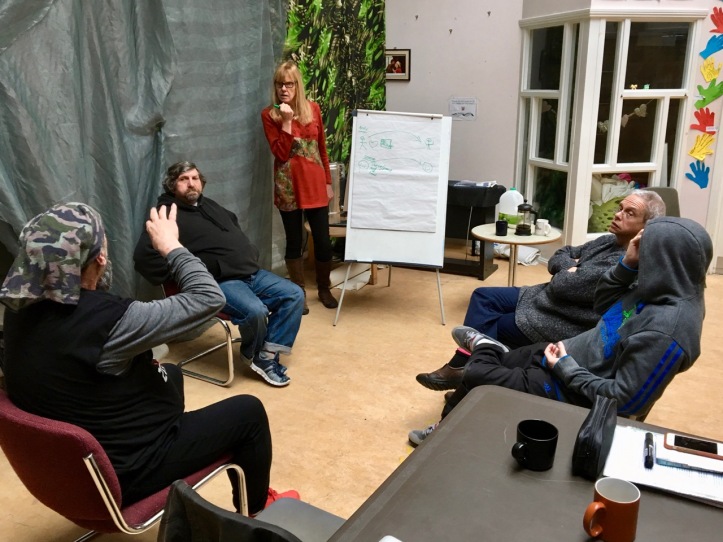 On Saturday, when we gathered for our third session together, Andy, George, Nick and Andrew told me about the busy week they’d just had, teaching through forum theatre at Teeside University. On the first day, they’d worked with 78 OT and radiography undergraduates and on the second with 40 students doing a Masters Degree in social work. Lawnmowers’ Creative Health Awareness Training, which has been developed over several years in partnership with Northumbria University, introduces health and care professionals to some of the needs that people with learning difficulties may have. It’s intended to reduce the misunderstandings that can lead to poor care and more serious consequences for disabled people accessing services. The students’ response is often powerful and sometimes life-changing – one person attending this week said that the course had made her decide to change her specialism. This short film gives a sense of how the Lawnmowers use theatre to help others understand their perspective.

As the Lawnmowers told me me about their work at Teeside University, it struck me how rarely discussion of participatory art recognises its social impact on the powerful – the ‘potential oppressors’ was the forum theatre term they used. And yet, if the Lawnmowers artists have benefited through their involvement with the group (as they are the first to say), the wider impact of their art for non-disabled people has been no less important. Thousands of care professionals have experienced something of the creativity and imagination of learning-disabled artists, and their understanding of other lives has permanently changed as a result.  That is also the rationale of cultural democracy, which the Lawnmowers have made a living reality for over 30 years.