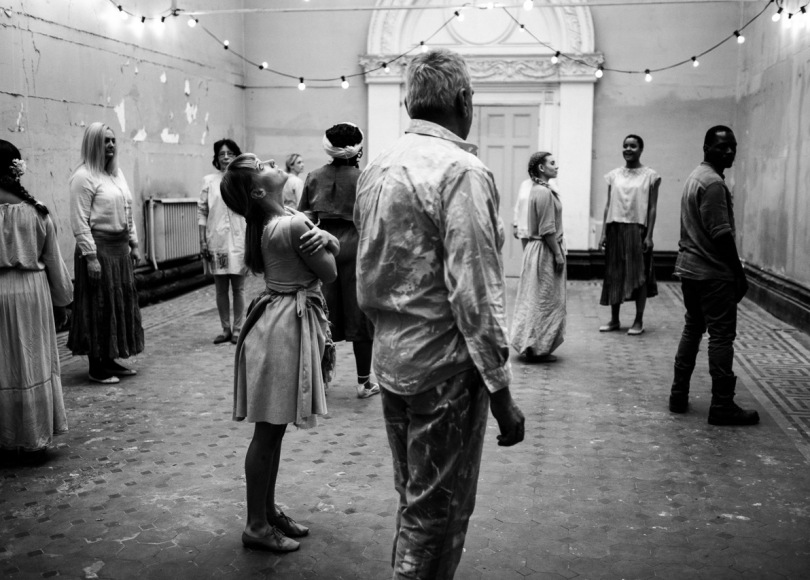 The Wedgwood Institute was built in the 1860s to support the education of ceramic factory workers in Burslem (Stoke-on-Trent). The factories are mostly closed now and the Institute stands empty, waiting for a new role. It is very appropriate that it should become a site for the work of Restoke, a small performing arts company creating new opportunities for local people to meet and learn together. Their 2016 piece, You Are Here, involved people from 15 countries, including Britain. It came out of a slow process of exploratory meetings, workshops and rehearsals, involving people who have moved or been moved to the city. As the work developed, they explored the unused building, seeking connections between its spaces and their experiences and stories. Between them, the professional and non-professional artists developed a performance that honoured each person’s culture and past while also affirming their choice to be a full, free and equal citizen of the country they now called home.

The five performances at the Wedgwood Institute were sold out. Whether the audience had an EAST or a WEST ticket determined their progress through the building and so the order in which they experienced the different scenes before they reunited for the finale. Many found it a profoundly moving experience. One person wrote before leaving:

‘There is knowing a thing and there is understanding. Beyond understanding, there is a deeper, more profound connection. Thank you for showing me your stories. I understand now.’

Ayad, who gave a powerful performance about his decision to abandon his home in Iraq, said afterwards that

‘there has been an attention paid for the asylum seekers and refugees and there has been an understanding for integrating them into the community and giving them a voice because this is what they miss. Regardless of the language barrier, they don’t feel the confidence to utter their feelings. This gives them a microphone, a white paper, a camera to write their story and make it readable for any audience.’

The builders of the Wedgwood Memorial Institute  would have understood what he meant. It was what they built it for.

My Tweets
Join 4,922 other followers