The Finnish National Theatre in Helsinki is involved in a range of work with community groups, including a programme to bring theatre into closed institutions such as care homes and prisons. Last year (2017), Jussi Lehtonen, who leads the  Touring Stage Programme, devised a new documentary theatre piece with people from refugee backgrounds and Finnish actors. The people who took part had mostly been professional actors or performers in their own country, though there were also non-professionals involved in the music.

Dr James Simpson, a researcher at Leeds University, described the production on a recent blog post:

Toinen Koti tells the story of a singer, Ali, an asylum-seeker from Iraq whose claim for asylum has been rejected, and his interactions with Migri officialdom and other authorities as he faces deportation. This main narrative thread is interwoven with other stories: Harith, a young actor and documentary film-maker also from Iraq who meets his new Finnish partner through social media; Soroush, a rap artist from Iran, whose dog but not his wife is allowed to accompany him to Finland; Bakr, a Samuel Beckett specialist from Baghdad who watches his actor friends murdered one by one before he escapes; Terhi, a Finnish actor with decades’ experience in the Finnish National Theatre who has a deep affinity with refugee artists. It’s a profound play, intensely moving, and all the more poignant because the stories performed on stage have their origins in the migration narratives that the actors themselves recounted at the beginning of the process eighteen months ago

The work was a success with audiences and critics, and the original run was extended. It was finally performed 30 times at the National Theatre, with the final show on 16 February 2018. In the following text, Jussi Lehtonen writes about the reasons for creating the show and the human challenges it presented.

I’ve long known that making theatre enables surprisingly equal encounters between people who are not actually equal in society. I’ve noticed it time after time when performing in care institutions. After a performance employees at a care unit would tell me about their observations: ‘I didn’t know that he understands poetry’ or ‘I never thought Kaisa could sit calmly in place so long.’ The care giver suddenly gains new information about the care receiver as a theatre event produces direct observations on the humanness of the people involved and the hierarchical roles are momentarily rearranged. I’ve noticed it when making theatre with former inmates and substance abusers. For people who have been in prison, role-work reinforces traits that are not connected to crime, prison hierarchies or drugs. It also changes me as a theatre maker and a person. I realize that a person preparing to be released from prison and I have the same basic emotions and needs. I recognize that there may be more things that we have in common than things that set us apart.

Through the Other Home project, which I realized together with people with refugee backgrounds, I gained new and more striking information about how art can unite people who are essentially ‘worlds apart’. We had people in our team from countries undergoing civil war, like Iraq and Syria. My intention was to make a drama from the stories and experiences of artists who had come to Finland as refugees, and to form a kind of hybrid community with them. The beautiful idea was tested when I discovered what kind of forces divided the members of our community although they shared the experience of being a refugee and ‘alien’.

The first time the situation really came to a head was when we were preparing a small performance to conclude our spring work period. One of the members of our community wanted to prepare a scene on a gas attack that had recently been reported to have occurred in Syria. Another member didn’t approve because he felt that the news was false. All of a sudden all the Syrians in the team took a stance either in favour or against the scene. It dawned on us that we’d been working the whole spring in a group whose members represented different sides in the Syrian War: the government forces and the rebels. They were people whose family members had possibly been killing each other 4000 kilometres away, while they were making theatre here in Finland. The group broke up because the most fervent proponents of the opposite viewpoints called it quits. We couldn’t help but respect their decision. But it is important that representatives of both positions stayed in the group. They found that they could make art together in spite of their differences.

The next time tensions emerged in our team was when Iraqi Kurds declared independence. Our work day began with heated commentaries and tears, for reasons that I didn’t at first understand. Little by little it became clear that among us were, again, representatives of different sides of a potential civil war: Iraqi Kurds and Iraqi Shia Muslims. I’d known all along that there were both Sunni and Shia members in our group, but the suspicion between them had not previously become apparent in any notable way. The Kurdish question brought the chasm into view. For a while everybody seemed to be on somebody’s side against some other side.

The reasons why these people have risked their lives, and left their home countries and families, were suddenly embodied in another person in the rehearsals of Other Home. Another person one was now supposed to be making theatre with. Expose oneself to. Trust in. This was an extremely challenging premise for making art. We were able to get over most of the situations of conflict through discussion. At times the situation was dealt with one-on-one and I got to serve as the mediator. Now that the outbursts of emotion had a designated time and place we could continue with our work: preparing our collective performance. It took us forward together. 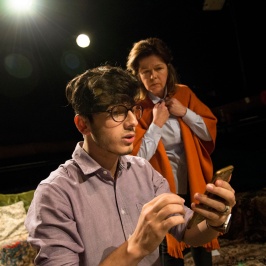 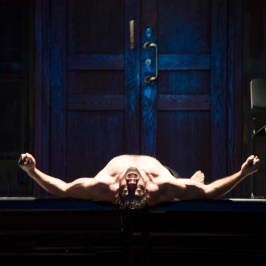 There were some more conflicts, but as the premiere got closer they weren’t so much linked to politics anymore. Or they were linked to a different kind of politics. To why that person has a bigger role than I do. He’s accusing me of lying. Why doesn’t he respect me even though I’m older than him? What gives him the right to always show up five minutes late? I hate the way he keeps making that that little humming sound all the time. And I’m sick and tired of always having to wait for everything to be said in both Finnish and Arabic. Normal, everyday things to complain about.

These gripes and groans felt comforting, maybe even therapeutic, like a sign of vigour or hope, because they were sketched against the experience of war. Many of the people I work with have lived most of their lives amidst or under the threat of war. A number of them have, because of their origin, been refugees for years, some ever since childhood. They have lived in conditions where a wrong name is enough cause for arrest, torture or execution. They have been tortured. They have seen first-hand their loved ones tortured and killed. In these circumstances the grudge against the other side must run deep. It must be located somewhere under the heart, in the blood vessels and the spinal fluid. When a person is able to complain about little things again it is a sign that life continues. The fact that we were finally able to produce such a fine performance with this combination may well speak of the same thing.

Let’s return where this piece of writing started. To the potential of art to bring about surprisingly equal encounters between different kinds of people. Preparing a performance on a theme that is collectively felt as important is a strongly integrating factor. We, the Finns, Christians and Muslims, Sunni and Shia, Kurds, Syrians, Druze, Iraqi and Iranians, did it together. We who hate each other can also love each other. Can the conclusion be drawn that we theatre makers could be of use in conflict zones in efforts to resolve difficult national and international crises?

Jussi Lehtonen is an actor, theatre director and post doc researcher working at the Finnish National Theatre and ArtsEqual, a research initiative funded by the Academy of Finland. The research places emphasis on looking at arts as a possibility to create a more equal society.

English translation by Susan Heiskanen. Thanks to James Simpson for permission to include his description of the play.