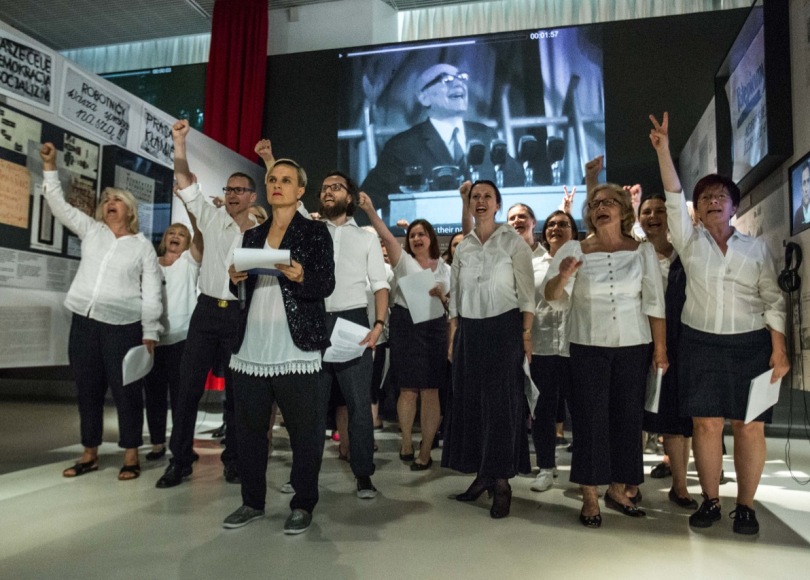 POLIN, the museum of the History of Polish Jews, opened in 2013 on the site of the Warsaw Ghetto. Its construction in such a space, and with such a purpose, was not simple. Poland’s past and its meaning for today are sharply contested. The institution also needed to build a relationship with local residents and with the people of Warsaw and Poland. That has been done in several ways, including through participatory art. The POLIN Choir is among the most ambitious and sustained of these initiatives. It was established in June 2014 by Ewa Chomicka, Head of POLIN’s Laboratory of Museum Practices, to sing at the opening of the core exhibition. Hometold the story of Jewish migration into Poland through texts and music from several traditions, woven into a powerful performance created with Sean Palmer and Kuba Pałys. Since then, the choir has developed new and more ambitious work, rooted in its members’ own experience of xenophobic times. Dialogue, performed at POLIN in June 2016, saw an increasingly confident choir singing about refugees, flight and safety, making connections between recent wars in Poland and the current one in Syria. Not for the first time in POLIN’s life, the results were controversial, especially on social media. The strength of those involved—artists, local people and institution—in standing for their values is as impressive as the quality of the art they make together.