‘We want to be remembered.’

An outsize bed stands on a Bristol shopping street. In it lies an elderly woman in night clothes, propped against her pillows. People walk by quickly, careless or sensing something weird: they don’t want to know. Others stop, concerned. Are you alright? Is someone looking after you? What are you doing here? The old woman responds by talking about her life. Her children, who live far away in Leeds. The baby taken from her because she was unmarried. Her sorrows; her world. Memories. She asks for something tucked into the bedclothes. She talks about a photograph she holds.

People gather round to listen. They join in. They talk about the parents they worry for, an elderly neighbour they’ve not seen for days; their losses.

‘I live on my own,’ says someone. ‘I’m on my own every night with these two dogs, and every day. It’s bloody lonely, you know. Nobody understands if they haven’t got family and I haven’t got family. It’s a brilliant idea doing this. My dogs keep me going. If it weren’t for them, well, I’d have jumped out of the window ages ago.’

This is personal. A real conversation is taking shape. As it does, the sense comes too that this is not life. But what, then—theatre? And yet it is deeply real, in that intense way art has of heightening what we already feel, though don’t say, even to ourselves. Or perhaps ‘unconcealing’ reality. True and untrue at the same time.

Now a couple of people have come over and they’re talking about what is happening. They explain that this isa performance: street theatre. They have leaflets about the company and about loneliness in old age, with contact details of organisations who can help. People nod their understanding. They relax a little. One by one they pick up the threads of their day and move off, down the street. But they are not quite the same. They will remember this strange meeting. Some leave intending to act upon it. ‘You know what? I’m going to visit my grandmother this afternoon. I don’t see her often enough.’

The old woman lies back on her pillows, alone again, on the street. Someone stops. ‘Are you all right?’

This is ‘Bed’, devised and performed by non-professional actors from Entelechy Arts Elders’ Company. The people who play characters in the piece, Rose Wheatland, Thelma Hunte and others, came to theatre late in life. Retired, sometimes bereaved, they were looking for something to do, a role, a way to make sense of life, at the age they find themselves. They found Entelechy Arts, a small participatory arts organisation based in Deptford, a poor district of South East London.

Entelechy defies categorisation. Its foundation is theatre but to say that risks giving a misleading impression of a company whose art involves diverse media, forms and aesthetics. Cabaret, tea dances, interactive performances, memory boxes, social gatherings, live art—these and other frames have held Entelechy’s imagination at different times. Entelechy’s small staff, led by founder, David Slater, and a network of freelancers, make art with vulnerable people: those with disabilities and the old. Consequently, its work is often low-key and intimate. Workshops and performances (the border between them is blurred) happen in domestic settings. The work is experiential and experimental, responding always to the imaginations of those present. What will happen is uncertain, so people need trust and patience. So do outsiders, who can find it hard to understand what is happening below the surface.

Relationship is Entelechy’s heart, a living connection enabled by and expressed in art. But this is not the ‘relational aesthetics’ of contemporary art. The elements that fuse to compose a piece—aesthetic, practical, intellectual, narrative, physical, symbolic, emotional—are contributed by everyone. ‘Bed’ was not conceived by a single artist. It was shaped slowly through the regular act of being together in a shared creative process.

‘I’m curious about how you can develop relationships with people so that you can get lost together and then find each other—and find a slightly different part of yourself in the company of other people.’

This relationship is rooted in continuity, commitment and openness. People speak from the heart because what they talk about matters and time is short. Here, ‘vulnerable’ is not a label: it’s a fact of life and death. When the Elders’ Company travels, everyone knows that the effort may actually be too much. Age and frailty are real. The group has had to conduct its own rituals to mark its lost members. The work continues, not despite the risks: because of them.

Sometimes, the creative work done in community centres and care homes demands a bigger forum. There is something that wants to communicate more widely and then ideas developed in workshops emerge blinking into public space. ‘Bed’ is one of those. Formally premiered in 2016 at a street art festival, the piece had been evolving for five or six years before finding its current form. The elders first gained experience of semi-improvised performance on London’s South Bank during the Capital Age Festival when they engaged visitors in structured conversations. The group were exploring the power of silent attention in the interaction of performer and audience. Working with David Slater, they began to investigate how to help people first sense the space between them, and then choose whether and how to enter it.

These formal ideas connected with elders’ sense of invisibility in the world. They felt that old age had erased them from the consciousness of younger people who, seeing them as of no interest, didn’t see them at all. They were aware of the burden of loneliness this invisibility placed on millions of people, even if—or perhaps because—their own lives are enriched by the friendships and support that come from being part of Entelechy Arts.

For several months the elders company worked on these ideas, sharing their own life experiences, and using a bed as focus of conversation and reflection. They liked the paradox of treating this most intimate human space as a public platform. It was a small step from there to using the bed as a stage, so they took it into the street market beside the community arts centre where they meet. They very quickly discovered how disturbing that could be. Within an hour they’d had to explain to the police and social services that everything was all right, this was theatre, nobody had actually been abandoned on the street.

When two teenagers came into the building wanting to report a crime, the drama group began to appreciate the power of what they had created. Augusto Boal called such undeclared performances ‘invisible theatre’, yet through it the elders became visible to young people once again. And, thinking about it, perhaps the loneliness to which so many people are abandoned is a kind of crime.

‘It has quite an impact, doesn’t it? It’s sort of shocking.’ 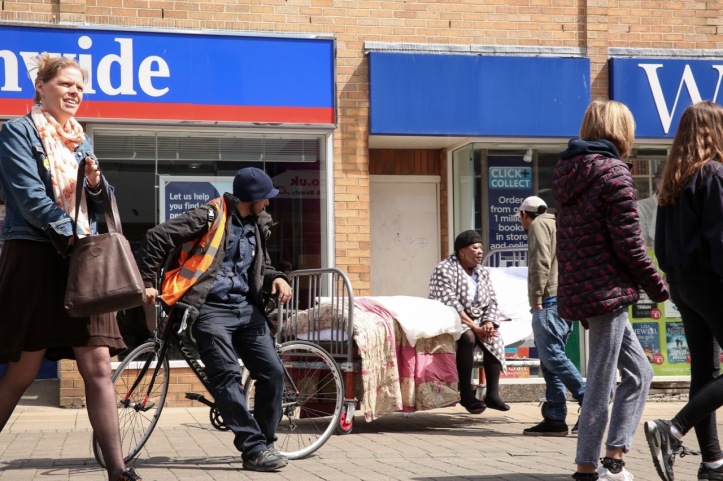 It has taken the company a while to work out how to handle sensitively the confronting nature of this performance. On the one hand, it loses its much of its power if it is presented as a theatre spectacle. We’ve become used to the oddest things in public space, even cynical under the performative assault of media companies and advertisers. On the other, no one wants to manipulate and upset passers-by who come across an elderly woman lying in the street. Art interventions too can fuel cynicism.

In practice, the responsibility for managing their reception lies principally with the performers. They are the artists who know what is happening. So they must stay in character while responding to the feelings of whoever is talking to them or, on one occasion, praying for a miraculous recovery. It would be a lot to ask of professional actors. It is remarkable that people who have become artists late in life are able to negotiate these fine edges so well. But perhaps it is because they are not hired hands relaying someone else’s experience that they get it right, most of the time.

‘We don’t have a certificate to say we went to a drama school but in this community, here we are recognised. We want to be remembered.’

‘Bed’ shows that participatory art can be artistically powerful and unsettling, and that non-professional artists can be innovative, rigorous and brave in their creativity. It shows too that when people have the opportunity to make art for themselves, they enlarge both the language of art and what it has to say.

‘There’s a line at the end of The Tempest that haunts me, where everyone gets lost on this island and then they find themselves: “All of us, ourselves. When no man was his own”. It’s the beauty of being an artist that you can create a space that is a part of, and apart from, both at the same time.’