Choked by this #Somme100 commemoration. At a time when being British makes little sense, just beautiful. #wearehere

On Friday, 1 July 2016, early morning travellers at Glasgow Central Station came across an odd sight. A group of soldiers stood silent on the concourse, between the Cornish pasty stand and a Starbucks coffee shop. They wore uniforms of the First World War, some in the kilts of Scottish regiments, laden with webbing, packs and helmets—but no rifles. They waited quietly, shifting from one leg to the other, squatted or sat on the pavement. One or two toyed with a cigarette. None spoke or paid direct attention to the others. But, in all their solitariness, they were a troop: without warning, they stood and sang, to the tune of Auld Lang Syne:

The tune faded into the station hall and the soldiers resumed their vigil. They did not reply when people approached or spoke to them, though they might accept a handshake. Anyone who did address them might be handed a small, white card:

At 0728 on 1 July 1916 great mines erupted beneath German trenches in Northern France. That evening, 19,240 British soldiers were dead, together with thousands more French and German troops. The Battle of the Somme continued until November 1916, by which time casualties on all sides exceeded one million. Like a small, perishable tombstone, each card bore the name of a man who died on the first day of the battle.

The soldiers at the Central Station were among 1600 young men who spread out that morning on foot and by public transport from venues across Britain and Northern Ireland: Bangor, Birmingham, Leeds, Plymouth, London, Oldham, Salisbury, Cardiff… Throughout the day, they tramped the streets, wandered unseeing through Ikea and Tesco, smoked at bus stops, rode trains to nowhere. Tourists from a cruise ship found them waiting on the quay at Lerwick, where, in 1914, two hundred Shetland lads had boarded the first transport south. In Belfast, the soldiers lined up outside the Europa Hotel, notorious for its frequent bombing during the Troubles. At Chester Bus Station, they stood among shoppers and schoolkids, dun uniforms at odds with the gaudy graphics of coach companies.

As the evening rush hour approached, in Sheffield, at Waterloo and Kings Cross, in Glasgow and elsewhere, the soldiers gathered again. They began to walk in circles, clockwise and counter-clockwise, purposefully purposeless. And they sang, as the Tommies they represented had sung,

With a final roar, they stood down, melting into the crowds like the ghosts they were. A little uncertain applause peppered their departure.

‘We had to go to places that were awkward and maybe that’s where the art is, going to somewhere where you really are not sure what the reaction might be but you have to push what’s acceptable.’

‘We’re here because we’re here’ was imagined by the artist Jeremy Deller, in response to an invitation from 14-18 Now, a body established to commemorate the First World War. It was created over several months by a team led by Deller and Rufus Norris (director the National Theatre in London) in a partnership of 26 theatres and arts organisations across the UK. The unexpected, unexplained encounter was essential to Deller’s vision, so the project had to be planned and rehearsed in secret. Invitations to take part were vague and made through the organisations’ existing contacts. Like the volunteers of 1914, the men who responded had no idea what they were signing up for.

The National Theatre of Scotland (NTS) was one of the first to join the project. Founded in 2006, it works without a performance space of its own, preferring a decentred approach that demands partnership with others. Many of its productions have happened in unconventional places and involved non-professional performers so when they began recruiting participants in Glasgow and Shetland, NTS had networks to draw upon. By early 2016, some 80 men joined the project in Scotland, all sworn to secrecy about what they were doing. Each was given the name of a soldier who’d died on the first day of the battle and asked to research the man’s background, using resources prepared for them by 14-18 Now and Birmingham Repertory Theatre. Many participants became closely involved with the story of the man they would represent. One Shetland performer found that his own great grandfather had been among that first group to leave the islands for France. This sense of bring a real person to mind could be powerful, as one of the Glasgow participants explained on the morning of 1 July:

‘I think, when I’m out today, the main feeling is going to be one of responsibility. It’s our job to say this happened, and we need to know that and we need to remember that.’

They were measured for uniforms and, in weekly rehearsals, they learned the rudiments of military drill, and the behaviours that they were to adopt on the street. The theatre professionals had considered difficulties that might arise from this unannounced appearance of soldiers on the streets, but they had not anticipated how some people might be affected:

‘We trained them up for all sorts of reactions from the public –people who’d want to take selfies, or abuse from guys drinking on the street, or people who were pacifists, but what we didn’t train them for was people breaking down in front of them. And that happened almost immediately, people literally stopped dead in their tracks crying, or they came up and wanted to hug them or shake their hands or just be with them.’

The images and comments that began to flood online platforms like Twitter, Facebook and Instagram soon after 7am on 1 July express the emotion stirred by coming across these silent figures on the daily journey into work.

As word spread, so did the ripples. Something that had begun with one artist passed first to producers, then to partners, participants and passers-by before eventually reaching people who found it online, in their news feed or shared by a friend. It bound the personal, symbolised by the gift of a card with a single name, to the group, as individual experience was shared. Like the telegrams that came back from the Front, the soldiers’ cards returned the unimaginable to a human scale. Names became faces. What passed from one person to another in 140 characters or an image became intimate and public, personal and national. It is the strength of art to be able to hold such worlds in a nutshell.

Success in theatre, as in war, can be a matter of preparation. For the participants, 1 July 2016 marked the culmination of months of training, rehearsal and engagement with lost lives. It also brought the release of being able, finally, to tell people what they’d been doing so discreetly. That evening, they wanted to talk too about encounters with people whose feelings they’d been unable to respond to while in character.

In the following weeks, conversations continued on WhatsApp groups set up to manage the project and in more public forums; they revived when the BBC broadcast Jeremy Deller and Kate Church’s film about the day, and people got a better sense of the scale of what they’d been part of. National Theatre Scotland had commissioned a photographer to make portraits of every participant in uniform and they received prints of these to commemorate the moment. And, like everyone else involved in the project, every participant received a print of the sheet music of their song, signed by the artist.

‘We’re here because we’re here’ was brief but it touched millions of people because it was conceived for the age of social media. It was not chance that #wearehere trended that day on Twitter: it was part of the project’s concept. On Shetland, soldiers were sent to the white beach of St Ninian’s Isle and the cliffs of Esha Ness, not because they would meet many people but to produce the type of iconic images that are shared online. Seeing that photo, or hearing from a friend who had seen the soldiers, might not move people as much as a face to face encounter, but it hugely expanded the range and connections of the event. There are many forms and degrees of participation.

The piece’s unsettling aspects—the dangers of sentimentality or manipulation, the ambiguity of soldiers on the streets at a time of real insecurity, the symbolism of sacrifice and resurrection, even the marking of the start rather than the end of fighting—are inseparable from its subject. Historically, art has allowed human beings to confront their distress and anguish. Many of those who lived through the First World War turned to it at the time, or later, and it is through their creativity that those events still speak to us. Is that still true of art today? Does it seek, is it able, to accompany us in our most dangerous paths? Whatever you make of ‘We’re here because we’re here’, the courage to engage creatively with grief, memory and honour, with war and militarism, with national identity, with, in short, matters of life and death, is surely admirable.

Importantly there’s no one alive who fought in the First World War, it’s possible now that there’s no one left who can even remember living through it. So we’ve lost the human connection to it, and that is an interesting moment, and potentially a difficult moment, because that’s when there is a tendency to romanticise things. I kept writing in my notebook “AVOID SENTIMENTALITY”. But if the public want to feel sentimental about something they will, and you can’t change this. However, I hope it was a slight jolt for the public. Maybe that’s the word I’m looking for – a jolt. 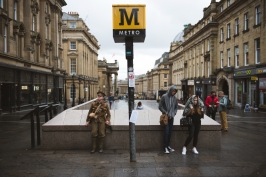 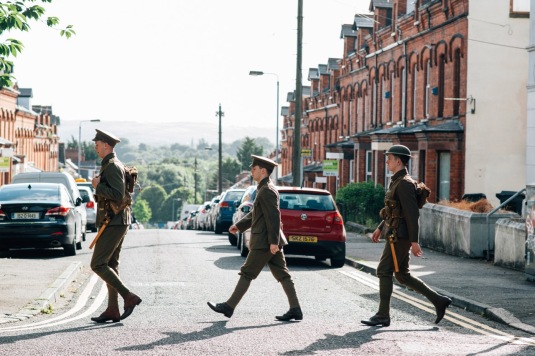 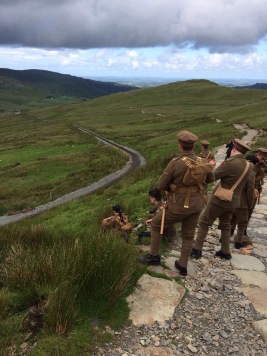 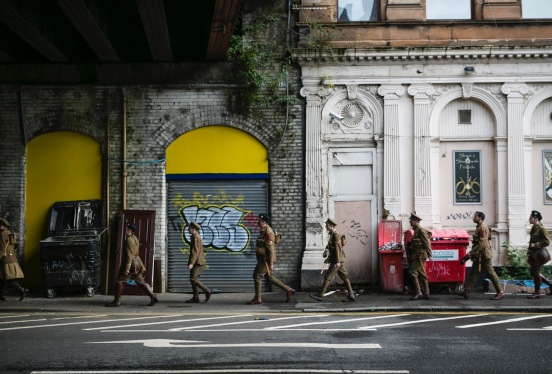 With thanks to Simon Sharkey, Jeremy Deller and Chloe Morley, all photographs courtesy 14-18 Now except where stated.