Well. Today was a challenging day. First of all, I had to dance, or at least move in roughly the same direction as everyone else, at roughly the same time. I’d managed to avoid Antonio’s workshops up to now, even though they are fantastic as the delight expressed by everyone who does them testifies. But I have two left feet and any attempt at physical coordination makes my brain hurt. I feel like the boy at the back of the class who can’t give the answer everyone else learned last term. But today, we began with presentations from group members about their work and one took the form or a traditional Lithuanian circle dance as an embodiment of community: there’s no good reason for not joining in. So I did my best, generally landing on the opposite foot to everyone else and half a beat behind. 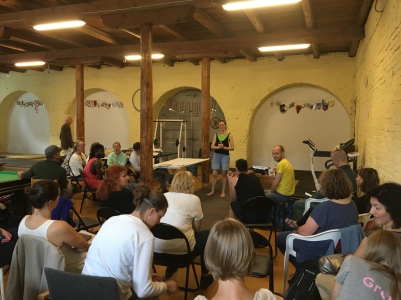 The other presentations were less participative but equally memorable, especially those on the Faro Convention by Prosper (from France) and Tatiana (from Ukraine). I’d looked into it when it was signed in 2005, but had largely forgotten about it until last year, when a friend brought it to my attention. It’s a key Council of Europe document that promotes ‘a wider understanding of heritage and its relationship to communities and society’. The presentations – including one about Hotel du Nord in Marseilles – helped me see connections I’d not previously recognised. 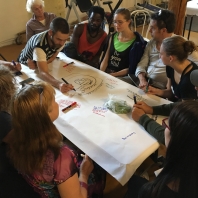 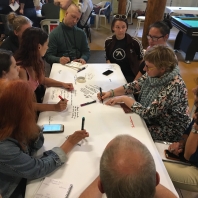 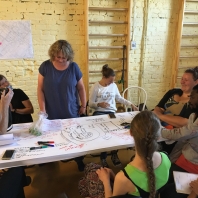 The afternoon did not go as I had anticipated. It was scheduled for ‘co-creation’ and the design group had planned to be making for tomorrow’s performance. However, it turned out that the idea was to have a structured a discussion to reach a shared understanding of the work’s aim, values and tasks. It was a principled approach with interesting potential, but I wasn’t sure this was  the right time for it. But trusting other people’s judgment is intrinsic to this work and though the experience was challenging for me, it  has given me lots to think about. More importantly, we got to a good place by the end of the afternoon. We have a common vision of what we’ll do tomorrow afternoon, and why. Tomorrow, at 3pm, a sketch of a community opera will be performed for an invited audience on the Cabbage Field. Sadly, I’ll be on my way to the airport by then, but I hope to see the dress rehearsal. Not everything happens as you plan in community art, fortunately: that’s what makes it so valuable.