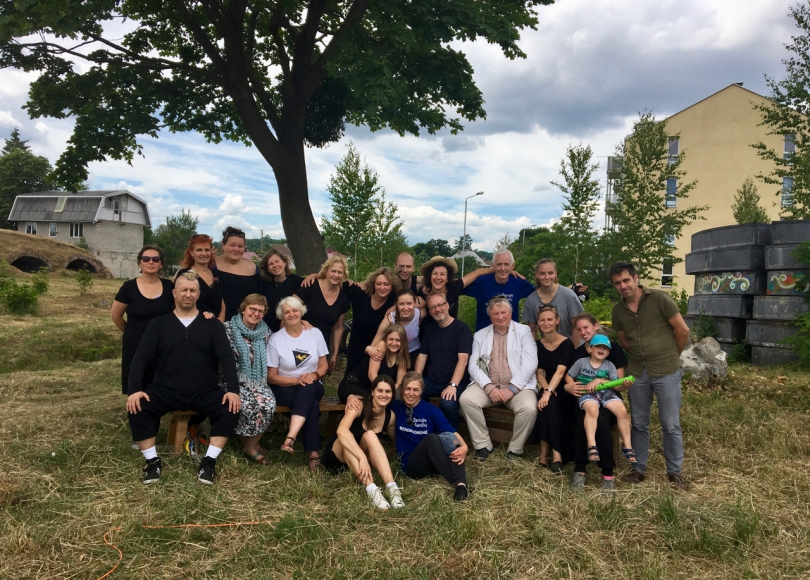 When we met on Friday morning, there was a cheerful determination to get on with what was still to be done. For the performers, that was fairly straightforward, because it meant rehearsing the opening scenes of the community opera they’d been developing. We’d talked about commitment in performance, looking at a film by Streetwise Opera for inspiration. In a very short time the group had gained confidence and authority through their work with some excellent professional artists. There were also experienced dancers and gifted singers to anchor the piece and I was sure that they would present a convincing show.

The visual side was more tricky, largely because it was midsummer and we’d been working on ideas for midwinter. There was nothing we could do with light on a hot afternoon in June. We’d also had little time to assemble materials or work on costumes and props. On Friday, we had about 90 minutes to create some kind of staging, so we had to be simple. The solution was to create four large scarecrows to define the performance space on the cabbage field. Some old curtains were transformed into figures by nimble hands. Cardboard seats were used for heads; bamboo, wire and gaffer tape did the rest. They represented a kind of chorus of citizens protecting the cabbage field. Not great, but like the performance itself, a statement of intent, like putting a flag down to claim the territory. 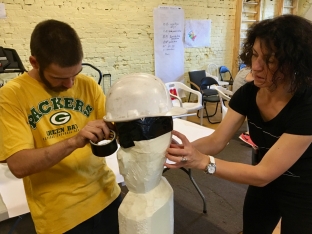 At noon, we trooped from the sports hall to the cabbage field for a first run through. The weather was kind – warm, but with some cloud cover (the temperature has been in the high 20s all week). Choosing the site, installation, setting up a PA was done quickly, without fuss: the common purpose in a community in formation. By the time pizzas were delivered for lunch, everything was in place and a first run through complete. 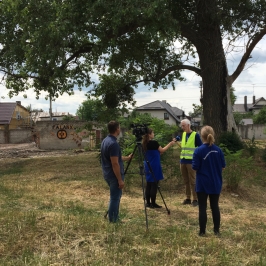 After the break, we did two more rehearsals and I found myself in the dance again, more comfortably this time. Lithuanian national TV came to record interviews and film the rehearsal for the evening news. There was time only for a group photo and then goodbyes. By the time the show as presented to the invited audience, I was going through security at the airport. 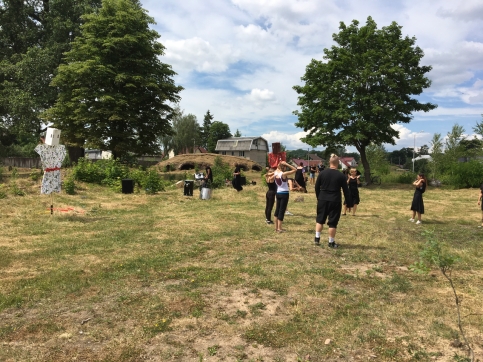 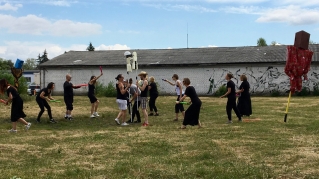 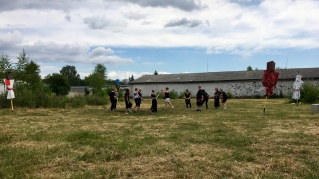 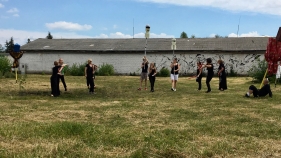 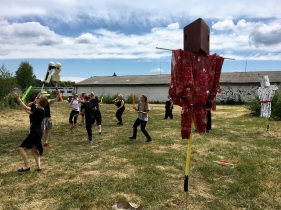 It’s been a wonderful week of effort, laughter, creativity and challenge, defined by new meetings and friendships. I feel nourished by the experienced and have a lot to reflect on. This will be the last of these daily blogs about the cabbage field opera, but I’ll come back to this with a more considered piece when my ideas have settled. In the meantime, thanks to anyone who’s followed this story over the past few days.